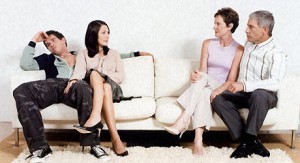 I always wanted to marry a handsome, intelligent, dark skin African man and I did.  But coming from a different background (Caribbean) there were some prejudices that my family had against him.  They (parent & siblings) felt he was beholden to them because he should have felt privilege to be in a relationship with me.  This meant in their minds that he was supposed to make himself available to meet their needs (financial, errands, etc…) in addition to my own.  I want to tell my family that he is my husband not theirs, but I don’t want to be disrespectful.  I know that if I say the wrong thing I risk causing a level of drama where I would lose my husband and family.  What do I do?

This is a sticky situation indeed!  When a member of a family get’s married it creates a change in the social dynamics which can be an emotional roller coaster for everyone involved.  Though a new spouse is an addition to the family, they are also taking away a beloved member.  Which needs to be done.  The bible says that a “man shall leave his mother and cleave to his wife” Gen 2:24.  In the process of acclimation, many assumptions will be made by all who are involved based on their personal world view.  If these worldview differ then there is a risk of encountering major problem.  As a sibling of someone who is married, I experienced mixed emotions. I loved the fact that my brother found his love and was getting married. I also had to mourn the loss of what once was.   I had to accept that there were certain things we couldn’t do anymore.  He had to shift priorities to make his wife come first and as a sister who loved him, I decided to give him my support.  Thankfully, he married a wonderful woman.  We were clear about our roles in each other lives, which made for a smoother transition. But what if there is not a clear understanding within a family about roles and boundaries when a member enters into a marriage? What should you do?  In a perfect world, you would have seen the signs and addressed them before you got married.  This is not the world we live in.  More often than not we have to backtrack and tweak and fix.  It looks like you might need to have some challenging discussions.  Here are some suggestions to help you along the way.

Generally speaking, In every person plays a role in every social group.  It’s an unspoken agreement made between social units. This is clearly displayed in T.V. shows like friends.  Though in reality the differences in roles are a lot more subtle and in every group there is a gatekeeper. The one who has the most influence over the group.  This person is not always the loudest or the bossiest.  They are not necessarily the one starting trouble but when they speak, everyone listens and are converted.  Their power of influence in the group is bar none.  This person is critical because they normally would be able to understand where you are coming from and do something about it.  Provided, of course, if you communicate with them effectively.  Which is my next point.

You need to understand the language of the person you are speaking to.   This means you have to be able to put yourself in their shoes and see where they are coming from.  You might learn something!  Knowing their language is so important because it lets you know how to say what you need to say.  For example, there is a book called the five love languages, by Gary Chapman.  In it he explains that when it comes to communication, most people can be generally categorized into five categories.  The categories are words of affirmations, quality time, receiving gifts, acts of service and physical touch.  Though this theory was developed initially for married couples he has since found that it could be applied to all relationships which brings me back to my point. If you understand them then you have a better chance of reaching them rather than saying  something that can turn them off.  When you do speak, articulate clearly what you want then re-enforce your words with behavior.  The next thing you can do is the following.

Once you have had the conversation, changed your behavior, you need to give everyone time to get used to the changes. You re-enforce your boundaries accordingly and continue as planned.  They may not like, you might get opposition, but eventually they will get used to the change.  Mind you, there are extreme cases where a relative refuses to budge on an issue.  It’s their way or the highway.  If you come across that type of behavior.  You have to make a decision about how much power they will be able to have over your life.  Then act accordingly.

I am not saying this will be easy.  This will probably be one of the hardest things you will ever have to do because everyone involved is important.  But you have to cut the cord (cut the figurative umbilical cord that keeps you as a child, not your actual family) if they are not willing.   Your marriage has to be given a chance to succeed.  In all honesty, there is no way I can give you a proper answer to your question because so many details are missing and I am not a marriage counselor. (now she tells me…) I would suggest in addition to what you have just read that you speak to your clergy or a person who has been married successfully for a long time.  Read books on the subject.  There is a lot of information out there.  But remember, you are no longer a child.  you have to deal with this as an adult and that means not ignoring the situation.  I will leave you with this quote.

“Other things may change us, but we start and end with family” Anthony Brandt

I know that more can be said on this subject.  So come on!  What do you think? Do you have any comments, or advice?  Feel free to post them!  I just ask that you remain respectful in what you say.   If you have any questions for me send them to lifeaccordingtolouise1@gmail.com.  I would love to hear from you!  Just remember, I am not a licensed therapist therefore not liable for any advice that is shared here. – Blessings! 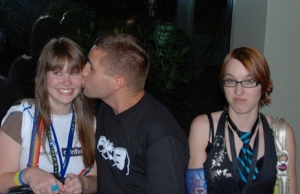 My friends don’t like my boyfriend because he doesn’t meet their standards.  They say I can do better and laugh at the idea of us being together.  I love my boyfriend and think that he is the sweetest guy I ever met. I also love my friends. What should I do?

I don’t like the fact that your friends laughed at the idea of you being in a relationship with your boyfriend.  That is just rude!  You have the right to have friends and a boyfriend. However, if they are truly your friends, they love you and want the best for you.  Ideally, it would be great if everyone got along but sometimes that doesn’t happen even when all parties involved genuinely love each other (or in this case – you).  It’s during these moments  you need to lovingly but firmly clarify your boundaries through communication.  The following are some suggestions for you to do prayerfully…

1. Be clear about what you want

You need to be clear about what you want in this situation.  Think about it.  What is it about your relationship that you love? Are you confident about where you stand in your relationship? Is that being expressed by you to the world? If you want to keep your boyfriend that is your decision and yours alone.  Others may express their opinions but they cannot force you to do anything without your permission. Also, ask yourself, ‘what kind of relationship do I want with my friends within the context of my love life?’ How much involvement will you allow?  Now you must understand that whatever behavior you expect from them you should expect give as well.  Whether you decided to stand your ground and stay in your relationship or breakup with your boyfriend then next thing you should do is this…

Once you make your decision stand by them unapologetically.  This is an issue of self-worth.  You should feel confident in your abilities to make a decision.  You also, want to be in a place where you are not bothered too much if your decision is not met with the full backing of your friends and loved ones.  I suggest you have a private conversation with your friends.  This situation might be resolved with a simple heart to heart conversation asking for support and respect. However, respectfully resolve yourself to live your life the way you decide if they choose not to deviate from their position.  When you are ok with yourself, the world tends to be ok with you. If not, you won’t notice, because it won’t matter.

It’s all about getting into a space where you can be open to think clearly and logically.  The truth is that there is a chance that  your friends might be right and your boyfriend is not worthy of your love.  If that is the case, these steps allows your mind to be clear enough to make rational observations and decisions.  When you reinforce your belief in your capabilities not only will you express yourself effectively, you will be able to listen effectively as well and appreciate it.  Your friends might point out some things that you haven’t noticed which may cause you to change your mind.

Please remember to engage with one another respectfully.  Remember that you love each other.  Come from a place of grace and understanding with the intention of resolving this issue.  I will leave you with this quote.

“Whenever, you’re in conflict with someone, there is one factor that can make the difference between damaging your relationship and deepening it.  That factor is attitude.”  William James

I know that more can be said on this subject.  So come on!  What do you think? Do you have any comments, or advice?  Feel free to post them!  I just ask that you remain respectful in what you say.   If you have any questions for me send them to lifeaccordingtolouise1@gmail.com.  I would love to hear from you!  Just remember, I am not a licensed therapist therefore not liable for any advice that is shared here. – Blessings!

Life According to Louise